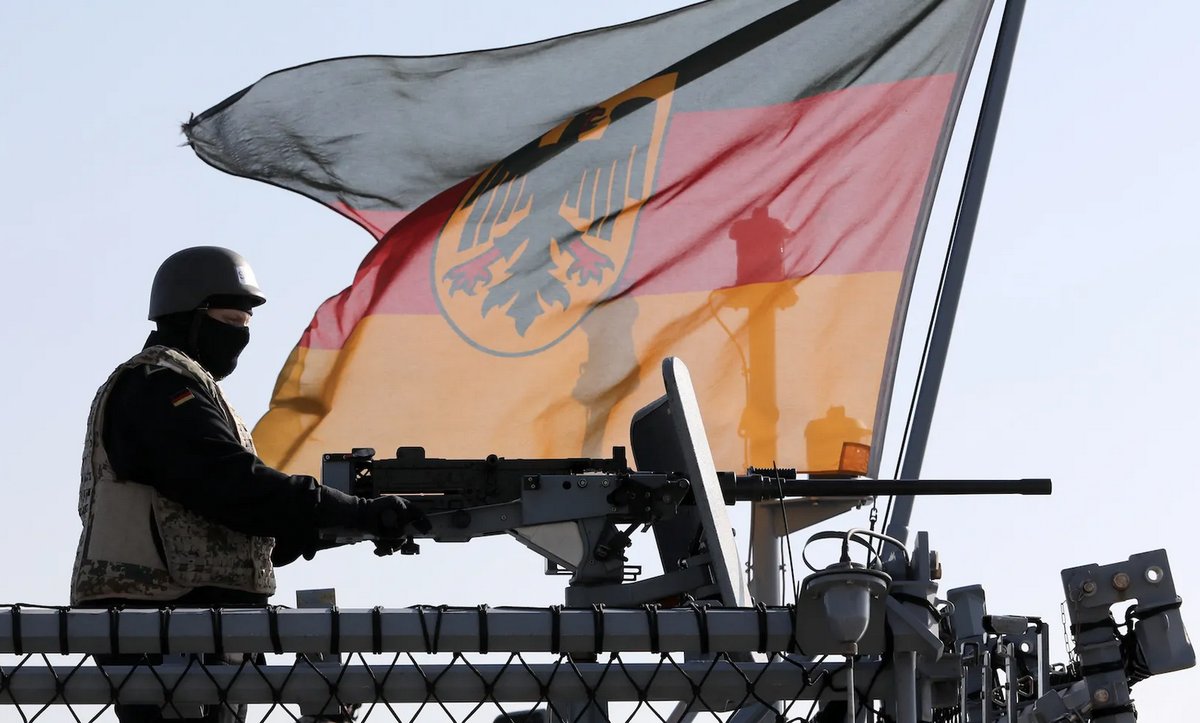 “Wir erleben eine Zeitenwende,” he says. “We are living a Zeitenwende.”

the Zeitenwende– a decisive moment, a change of times. Germany wants to make a Pledge of 100 billion euros military investments, bringing Germany’s military budget to 2% of its GDP, the highest level since the end of the Second World War.

The militarization and rearmament of Germany carry considerable risks.

When completed, this watershed moment will make Germany’s military budget the third largest in the world, after the United States and China, but ahead of the rest of the world, including countries such as France, the United Kingdom, the India and even Russia.

After only a few months in office, Scholz, regularly described as “boring” (the The Spiegel Last year called him “Sleepy Scholz”), is reshaping German foreign policy and perhaps world politics as we know it.

This move towards the militarization of Germany has been widely applauded by the Western security establishment and in the mainstream media. In a Virtual Atlantic Council Event with German Defense Minister Christine Lambrecht, the attitude towards German militarization was welcoming, even celebratory. “Congratulations,” a former NATO Supreme Allied Commander told Lambrecht.

Get Germany to strengthen its army and meet NATO’s 2% spending level has been a goal of the US foreign policy establishment since the guideline was established in 2006. It has been a constant source of frustration, leading to haunting calls, in different tones, from Bush, Obama, Trump and Biden.

Germany was also critical for its business dealings with Russia, in particular the controversial Nord Stream 2 pipeline, seen as enabling Putin’s aggression.

the Zeitenwende seeks to repair these perceived failures. It aims to deter Russian aggression and build a stronger and more cohesive European defense force. The ultimate goal, supposedly, is peace.

But the militarization and rearmament of Germany carry considerable risks.

“Militarization does not guarantee peace”, says Axel Ruppert The progressive. Ruppert works as project manager on peace, EU militarization and security in a global context in the Brussels office of the Rosa-Luxemburg-Stiftunga foundation for civic education affiliated with Germany Die Linke (Left Party). “That’s the thing we can learn from history, and I’m afraid that will hold true this time around.”

Warmongering proponents of pouring more money into defense to deter Russia fail to recognize Europe’s already high level of military spending. Already, the combined defense expenditures of NATO countries are almost twenty times bigger than that of Russia. Even without counting the excessive expenditure of the United States, the Member States of the European Union spend approximately four times After than Russia.

For any country, a military budget increase the size of Germany’s Zeitenwende would raise eyebrows. But, for Germany in particular, the size and ambition of the Zeitenwende is shocking.

“This is a 180 degree turn in German defense and foreign policy,” Ruppert said. “It is the abandonment of its position of soft power.”

German historical memory and guilt for its own atrocities during World War II weigh heavily in military and defense considerations. Since the end of World War II, Germany has favored a more diplomatic and less militaristic foreign policy.

Compared to the United States and other NATO allies, Germany’s use of military solutions in conflicts has been low. He hesitated to participate in the Kosovo war of 1998-1999, strongly opposed the invasion of Iraq in 2003 and objected to the intervention in Gaddafi’s Libya. This commitment to non-military solutions could change after reaching the highest military capabilities in Europe.

Indeed, the differences between a defensive army and an interventionist army are mainly theoretical. In reality, the line that separates them is often blurred. With the ZeitenwendeGermany could become a cornerstone of conventional interstate warfare power in Europe.

The speed of this proposal Zeitenwende – a 50% increase in spending in 2022 alone – will cause a number of political and logistical headaches, in Germany and beyond. On the other hand, this military buildup is unlikely to have an immediate impact on the current war in Ukraine.

The historical investments of the Zeitenwende, in response to the Russian invasion and the war in Ukraine, will have little or nothing to do with the Russian invasion and the current war in Ukraine. the Zeitenwende promises, however, a more assertive Germany, a more militarized Europe and closer integration with US military dominance for decades to come. The machine behind it: a growing German military-industrial complex.

Already, a booming German arms industry has been busy sending weapons around the world. Over the past decade, Germany has consistently classroom as the fourth largest arms exporter in the world. In recent years, this role has continued to grow.

“German weapons are used all over the world to kill and harm,” Ruppert said. He cites corruption in the German arms industry as an example of danger.

“The rules governing German arms exports exist only on paper,” Ruppert accuses. For years, one of Germany’s largest small arms manufacturers, Heckler & Koch, illegally sold weapons in Mexico. German arms manufacturer Sig Sauer is illegal Sales in Colombia fueled the civil war in that country. German weapons are also illegally used by Saudi Arabia in the civil war in Yemen, one of the most brutal modern conflicts and the greatest current humanitarian disaster in the world.

“Germany does not care about the consequences of these arms exports,” Ruppert said. The dominant German foreign policy program of Wandel durch Handel– or “change through trade” – becomes dubious when this trade is fueled by 100 billion euros in military investments. After all, a larger market and expanded defense systems will have to be satisfied with larger production.

“These projects will only be profitable if these systems are also exported,” says Ruppert.

A good part of the Zeitenwende the money will be funneled directly to US arms producers, further tying Germany to the US arms industry and US defense policy.

Already, the German government has declared its intention to buy American-made F-35s fighter and Chinook helicopters. Brinkmanship between Russia and the United States and the possible expansion of NATO to cement Europe’s place under the American nuclear umbrella. The prevention of nuclear proliferation suffers from this.

Beyond the arms industry, the abandonment of Russian oil and gas will prefigure a shift towards American oil and gas – a critical component security and the economy, as recent events have demonstrated.

“Europe’s strategic autonomy is greatly weakened,” laments Ruppert. With the Zeitenwende, “the EU’s dependence on NATO is increasing and that means dependence on the United States. This dependence, also in terms of energy imports, is one of the most effective levers to demand EU allegiance to US geopolitical ambitions.

According to Ruppert, a better approach would be for Germany, Europe and the United States to make peace their top priority. Saving Ukrainian lives and sovereignty, stopping Russian imperialism and preserving the dignity of all must guide all actions of external actors in the war in Ukraine.

A broader concept of security, including energy and climate justice, social well-being and equity, would serve peace in the future better than any army.

The political left must not abandon the peace movement. The military build-up of all countries must be monitored to ensure that at this decisive moment the world does not drown.