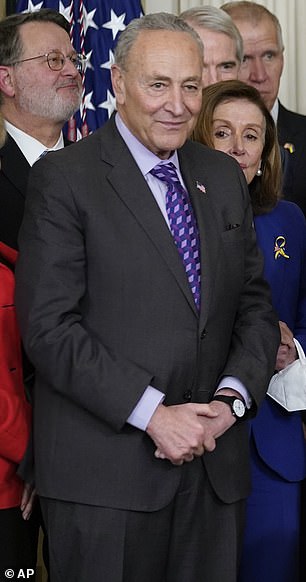 The historic voice vote saw all lawmakers in the upper house of Congress come together to bolster Kyiv’s forces by getting weapons and supplies to Ukraine faster and more efficiently. The measure is now heading to the House of Representatives, where it is also expected to pass – albeit not unanimously.

Months before Japanese forces bombed Pearl Harbor in December 1941, forcing the United States into conflict, the agreement gave the US president virtually unlimited power to supply European allies with weapons, tanks, planes and food, among other necessities.

This allowed the country to provide indirect support to others deemed to be in the interests of US national security, at a time when Roosevelt favored US intervention in the war, but not many others in the country.

The bravery and ferocity with which Ukrainian soldiers fought have impressed lawmakers in the United States and abroad, but the extraordinary escalation in the invocation of the World War II measure also suggests that officials fear that Moscow only presents a more brutal threat if it is not defeated in Ukraine.

Russia’s invasion of Ukraine prompted the US Congress to act in an unprecedented show of unity in a hyper-partisan climate of domestic politics. The Senate unanimously passed the new Lend-Lease agreement by voice vote, and Senate Majority Leader Chuck Schumer (left) called Vladimir Putin’s actions ‘genocide’. Senate Minority Leader Mitch McConnell (right) said on Thursday that the United States had a “moral obligation” to help Ukraine

The move comes at a pivotal moment in Ukraine’s defense against Russian autocrat Vladimir Putin. kyiv forces mounted an unprecedented 43-day resistance effort, forcing Russian forces to withdraw from the capital’s suburbs after occupying them for weeks.

Scenes of what Kremlin troops left behind sparked international outrage. Images of civilians of all ages lying dead in the streets, some burned, others with their hands tied behind their backs, have amplified Western governments’ accusations of war crimes against Russian forces and Putin himself.

Accounts of survivors speak of brutal treatment by occupying forces, including rape and torture of women and children.

In pleading for more help from the West, Ukrainian President Volodymyr Zelensky has warned that the atrocities seen in towns like Bucha and other Kyiv suburbs could pale in comparison to those that will occur in areas still under Russian occupation.

“It reminds us of the worst times in human history, caused by an evil man, Putin,” Senate Majority Leader Chuck Schumer said during a speech Wednesday night.

He accused Putin and the Russians of committing “genocide” in Ukraine.

The historic decision, which has not been invoked for more than eight decades, will strengthen Ukraine’s ability to fight Vladimir Putin (left) by allowing faster shipment of weapons and other equipment to kyiv forces . Roosevelt at the time approached virtual freedom to send as many supplies as needed to fight Hitler (right)

“When we wantonly kill innocent civilians because of who they are, be it their religion, their race, their nationality, that is genocide. And Mr. Putin is guilty of that,” the Democrat said.

Schumer, who is Jewish, is known to have lost loved ones in Nazi Germany’s genocides – particularly in Ukraine, he revealed in 2017.

Sen. Mike Crapo, a Republican from Idaho, said Putin was “determined to destroy” freedom and representative government in Eastern Europe and elsewhere.

The bill, called the Ukraine Democracy Defense Lend-Lease Act of 2022, will make it possible to de facto donate military equipment and other supplies to Kyiv without the normal bureaucratic blockages. Debts are supposed to be repaid at a later date.

Russia’s invasion of Ukraine prompted members of Congress to come together in an unprecedented show of unity despite the hyper-partisan climate of domestic politics.

The footage shows civilians with their hands tied. Pictured: Ira Gavriluk walks by the corpses of her husband and brother

Senate Republican Leader Mitch McConnell said Axios Thursday morning that the United States as well as the GOP had a “moral obligation” to help the Ukrainian people.

“We have a strategic obligation. It is in our interests to help Ukrainians and I think they are an inspiration to all of us,’ McConnell told the outlet.

As the Senate voted for the historic Lend-Lease deal on Wednesday night, the House voted overwhelmingly to support calls for a war crimes investigation into Russia’s alleged targeting of civilians and targets non-military such as schools, hospitals and recreational facilities.

Earlier this week, the State Department authorized an additional $100 million to Ukraine for more anti-armour systems.

The department said the new funds would total more than $1.7 billion in U.S. aid to Kyiv since the Russian invasion began, and more than $2.4 billion since Biden took office.