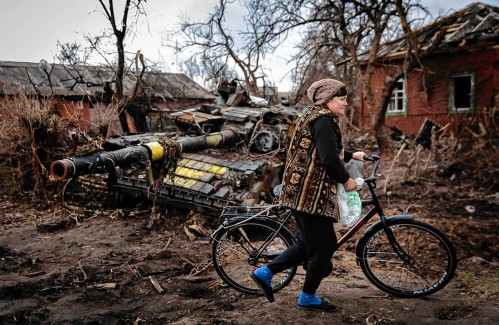 The Daily Hampshire Gazette is credited with encouraging lively debate about the war currently raging in Ukraine. Back and forth, some commentators have encouraged Russia’s occupation of large parts of eastern Ukraine, spoken out against military aid, complained that Ukrainian President Volodymyr Zelensky has rejected Russian invitations to negotiate and accused the Ukrainian government of allying with neo-Nazis to suppress Russian sympathizers. Others have argued that the United States should end sanctions against the Russian economy that seek to punish that country’s aggression.

There are good reasons to disagree. Foremost among the arguments for continued military aid are: the capture of Crimea and the Donbass region by Russia in 2014; his invasion of Ukraine in February; and the death and destruction he now visits upon this country, which we will examine below.

These are all flagrant violations of international law and of Article 2(4) of the UN Charter, which prohibits member states from using force against other states. These outrages, in our view, provide ample justification for the United States and NATO countries to support Ukraine with military and humanitarian assistance and to maintain economic sanctions against Russian President Vladimir Putin, his oligarch allies, and his government.

What about Zelensky’s alleged reluctance to negotiate with his opponents? Among its demands for a peace deal, Russia wants Ukraine to agree to remain militarily neutral, permanently cede Crimea to Russia and grant regional autonomy to Donbass, which sits on the Russian border. While the Ukrainian leader has indicated that his government will accept neutrality, he refuses to cede vital parts of his sovereign territory to Russia in exchange for Putin’s promise of peace.

Based on the Russian president’s broken promises to the Ukrainian government before and during the war – such as his assertion that Russia had no intention of invading – this decision is well made. Prior to World War II, Hitler made a similar promise in the Munich Agreement of 1938. In the negotiations leading to the agreement, British Prime Minister Neville Chamberlain attempted to avert war with Germany by accepting the Nazi occupation of the Czech Sudetenland in return for peace. We know how it happened.

It is now 84 years later. As we have become familiar with the rules-based order that was established in post-World War II Europe, it is difficult for most of us to truly understand what it was like to live in a Europe occupied by the Nazis and suffer Hitler’s murderous assaults. However, it is easy for Ukrainian civilians to imagine this kind of reality, as they endure Russia’s bombardment of their cities and many of the humanitarian evacuation corridors it has agreed to honor.

Putin’s army has also committed mass murders and starved civilians, bombed hospitals and schools, and driven millions to flee the country. We can add to these war crimes the Russian army’s use of large-scale rape as a weapon to terrorize civilians, a fact verified by Ukrainian and international organizations. If the Russian military is not committing what is technically described as genocide, it seems to be trying hard to do so.

Echoing Putin’s wartime propaganda about the “denazification” of Ukraine, some American commentators complain about the presence of neo-fascist elements in that country’s society and military. They accuse military aid of supporting far-right forces. The fact that extremists exist in Ukraine, however, does not define it any more than the neo-fascist elements active here define the United States and its military.

Other critics of military aid have accused President Zelensky of using militarist propaganda to foment his military and Ukrainian civilians into a hateful fury toward Russia, almost as if he was responsible for the invasion. The truth is that the Ukrainian people do not need to be incited to oppose Russian aggression. From frontline soldiers to territorial defense forces to the thousands of civilian men and women who volunteer to help the military, Ukrainians are fighting for their survival and for their country’s freedom.

As the war in Ukraine unfolds, European countries such as Moldova, Poland, Estonia and Lithuania, which were once part of the Soviet Union or its Cold War allies, fear being a future target of Putin’s expansionism. To the north, mostly neutral Sweden and Finland are so worried that they, as has been widely reported, are likely to apply for NATO membership. It is not surprising that these nations think they could be next if the Russian military succeeds in Ukraine.

Time and time again, Putin has demonstrated his determination to control or destroy countries he believes should be within Russia’s geographic sphere of influence. We shouldn’t stick our heads in the sand like Neville Chamberlain did when Nazi Germany invaded a European neighbour. Ukraine deserves our undivided support during its darkest hours.