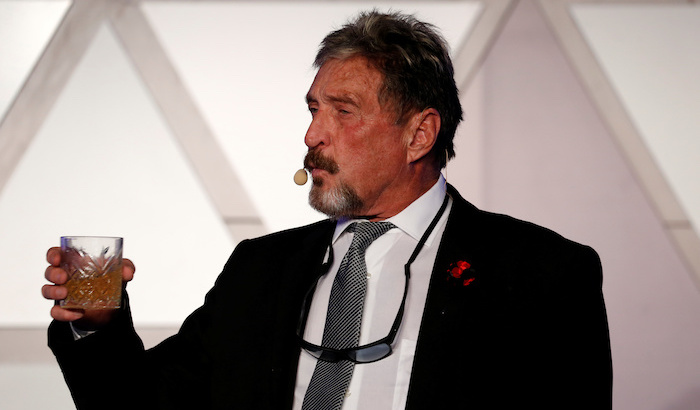 The suicide of John McAfee (1945-2021), a tax evader, bitcoin supporter and anti-virus software pioneer – a naturalized British American citizen – is rumored to have sparked both heartbreak and new conspiracy theories.

After evading taxes and flouting US authorities for many years, a Spanish court ordered – at first instance – McAfee’s extradition hours before he was found dead. Had he been extradited, the 75-year-old would have been sentenced to life imprisonment in the United States of America.

Edward Snowden, a former National Security Agency employee and whistleblower, criticized the global influence of US law enforcement and warned that McAfee’s untimely demise may not be the only one. He wrote on Twitter: “Europe should not extradite those accused of non-violent crimes to such an unfair justice system – and to such a cruel prison system – to the point that those accused in prosecution judiciary in the United States would rather die than be subjected to it “.

The founder of Cardano, an open source cryptocurrency project that aims to create a public blockchain platform (a digital ledger whose entries are grouped into ‘blocks’, concatenated in chronological order, and whose integrity is guaranteed by the use of cryptography) for the management of computer protocols which facilitate, control or impose the negotiation or the execution of a contract, sometimes allowing the partial or total exclusion of a contractual clause (smart contract).

Charles Hoskinson praised McAfee for his contribution to computing, calling him “one of the most mysterious and interesting people in the history of cryptocurrency and computing.” “He is also a deeply troubled person,” Hoskinson added, pointing to McAfee’s well-documented personal trauma from his substance abuse issues.

“The reason for the suicide seems obvious: McAfee was 75 and extradition to the United States of America was likely. If he had been found guilty he would have faced more than 30 years in prison and it is certain that he would also have been. incarcerated […] Rather, he seemed determined to choose to end his life in a Spanish prison instead of an American prison. “

“I once had the opportunity to spend a day with the legendary McAfee on a boat in the Bahamas. I will always remember this day. I have great respect for one of the most unique people in the world.

Kim Dotcom, a German entrepreneur and computer scientist of Finnish nationality, is an internet entrepreneur fighting New Zealand extradition charges on his file-sharing network Megaupload. He regrets that McAfee’s drug abuse robbed him of his potential. He said: “He was a pioneer in data security. I always thought it was too difficult for him to be around other people. He should have avoided drugs and instead focused on using his ingenuity all the time. When he was lucid, he devoted himself to the freedom of everyone “.

Although McAfee’s legal representative in Spain told Reuters that McAfee had committed suicide, preferring to hang himself rather than be sentenced to life in prison, the internet is rife with conspiracy theories claiming that McAfee did not die of his own hand.

Involvement of the deep state, or simply the result of American justice?

Shortly after McAfee’s official Instagram account shared the image of the letter “Q”, controversies and allegations arose, igniting the imaginations of QAnon conspiracy theorists that there is a hypothetical secret plot. organized by a so-called deep state (which can be identified in some hidden powers) that would act against former President of the United States of America, Donald Trump, and his supporters.

Business Insider reported that QAnon’s influencers on Telegram have hundreds of thousands of followers and share posts suspecting suicide stories.

McAfee’s tweets have been reposted since the day he died, and one dates back to December 2019, when McAfee claimed the government threatened to assassinate him. As a result, there are many who do not believe any version of his suicide.

Other conspiracy theorists followed an article published in June 2019 in which he claimed to have a data treasure chest of 31TB and more, containing evidence of government corruption.

Every eccentric millionaire who argues with the government claims to have evidence of corruption, and if tragedy happens to them, everything will be made public. In the end, tragedy befalls many of them, but the evidence is never disclosed to the media, unlike what is often seen in American films.

It should be remembered that McAfee was no stranger to bold and bizarre claims, including a promise that if the price of Bitcoin did not exceed US $ 1 million by 2021, it would devour its supporters on national television.

Over the last few weeks of his life, McAfee’s tweets in prison had also grown darker and darker. In May 2021, he revealed that he had discussed suicide with a cellmate: “Today, a person facing a difficult situation asked me if I knew of a method of painless suicide. I have little experience in this. domain and I’m not very communicative. Surprisingly, the tone of the discussion then slipped on how to pass the time. “

It should be noted that the businessman had no particular reason for the suicide. The point is that the decision of the Spanish court on extradition was not final. McAfee could therefore have tried to appeal this decision afterwards. It is alarming in this story that even last fall McAfee said he would not kill himself under any circumstances.

Javier Villalba, a Spanish attorney for McAfee, told Reuters he believes McAfee just cannot tolerate being locked in a prison: “This is the result of a cruel system. no reason for this elderly person to be in prison for that long. “

Conspiracy theories are flourishing in the United States. Probably fewer people believe in the “lunar plot,” which is, after all, a matter of national pride. The rest of the stories are similar: vaccinations and HIV – a conspiracy of drug companies; global warming – a conspiracy of climatologists; Kennedy’s assassination by special services – said special services even organized the September 11 attacks and school massacres, etc.

The story of Bill Gates implanting microchips in COVID-19 vaccines to follow us has also sold well: According to the latest polls, 44% of Republican Party members believe him.

The problem is that such opinions – sometimes naive, sometimes strange, and sometimes wild – often have consequences. Some people think 5G towers are really spreading the coronavirus and will burn them down. Others refuse to vaccinate their children, and so overwhelmingly that the WHO included it for the first time in its list of threats to human health. With the advent of the COVID-19 vaccine, this could become an even bigger problem.

It is futile to think that conspiracy theories are about someone else, and not the smartest people, and certainly not you and your surroundings. A 2018 poll showed that 67% of Russians believe in a secret “world government” (in 2014, it was 45%) and 68% of them have a higher education.

Conspiracy theories are not a cohesive story to believe or disbelieve. Rather, it is a multitude of interpretations of individual facts, each of which can occupy any place on a scale from sheer absurdity to scientific proof. Some might view the enslavement of humanity by aliens as incredible, but oppose vaccination – or vice versa.

When the subject is confronted with stress due to external circumstances, the thought runs the risk of becoming more conspiratorial, and thus of developing the four characteristics mentioned above.