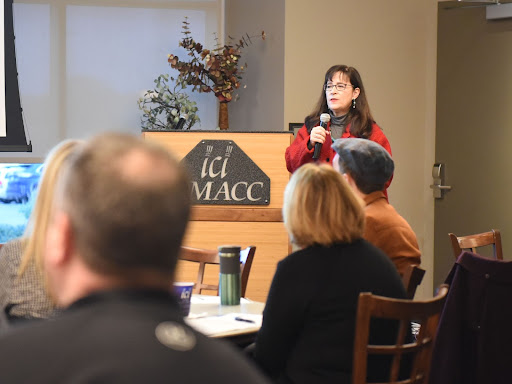 Returning Iowans who are currently homeless to the workforce should be part of the solution to addressing Iowa’s workforce crisis, said Melissa O’Neil, CEO of Central Iowa Shelter and Services in Des Moines.

O’Neil was one of the participants in a regional workforce roundtable hosted by Iowa Workforce Development last week in Ankeny. The event, one of two dozen the agency is running across the state until November, drew about 70 attendees to the Iowa Culinary Institute at Des Moines Area Community College.

Beth Townsend, Director of Iowa Workforce Development, along with Deputy Director Ryan West and other IWD officials, personally chaired the roundtable with DMACC President Rob Denson. The events are designed to promote awareness of the agency’s programs and to directly solicit feedback from business leaders on what is working and what could be improved. The state task force on child care, workplace learning programs and recorded apprenticeships were among the topics highlighted.

Strengthening existing pipelines of workers and tapping new sources of workers were brought up in a discussion that followed an overview of IWD control programs. Currently, there are approximately 86,000 positions available statewide, while approximately 68,000 Iowans were unemployed in August. (September figures, released after the roundtable last week, fell to 66,000 unemployed).

O’Neil, whose organization serves about 2,300 people a year, said about a third of the homeless in Iowa served are in this situation because they are either underemployed in a paying job. minimum, or have lost their jobs. “I have your workforce,” she said of these potentially employable workers.

Reaching the military in their last six months of active duty is another potential source of workers, Townsend told attendees. Through the Department of Defense’s SkillBridge program, an Iowa employer can recruit a military person who wishes to work in Iowa. As part of the program, the Department of Defense continues to pay the member’s military salary and benefits for up to six months while the person trains for their new civilian job. A handful of employers in central Iowa, including Northwestern Mutual and Builders FirstSource, are participating in the program so far, according to an interactive map on the SkillBridge website.

Technology upgrades at DMACC: DMACC’s early childhood education program on the Ankeny campus uses Swivl, a technology application that has made it easier for DMACC students in early childhood learning programs to make high-quality video recordings of their interactions with the children they work with in local daycares. for mentoring purposes, as well as to help support staff training, said Katie Champlin, professor in this program. The program has been using Swivl since 2017 and, during the pandemic, acquired more units to support students. “This has resulted in increased support for quality practices in these programs directly,” she said. Recently, his program and classroom were selected as a model for a $ 38,000 technology upgrade that DMACC will be doing to allow distance learning and in-person learning to take place simultaneously in classrooms. classes from other campuses and DMACC programs, she said.

Workplace learning: Workplace learning programs coordinated by DMACC serve more than 2,500 students per year through in-person events; the programs were also offered virtually during the pandemic. Events start with a tour of the DMACC campus, then visit one or two companies.

The Governor’s Advisory Council for Economic Recovery, which issued a report earlier this year, recommended that 75% of school districts in Iowa have one or more school-business partnerships by 2023, and that all high school students participate in workplace learning by 2024 As stated in the final report, “All students in Iowa should have equal access to WBL, regardless of where they live or the size of their school or community.” Businesses must step up and commit to creating these opportunities with their local school districts to help create, expand, and develop Iowa’s future workforce.

The last dollar fellows: DMACC is one of the largest participants in the state’s Last Dollar Scholars program; Over the past two years, 2,883 DMACC students have received Last Dollar scholarships to pursue DMACC career programs, said DMACC President Rob Denson.

Statewide, more than $ 65 million in Last Dollar scholarships have been awarded under the Future Ready Iowa program, which began distributing funds in the fall of 2019. Townsend said she would like to see 50 million dollars in additional funds allocated to the program in the next Parliament. session. “I have no doubt that we could reward all of this,” she said.

A personal connection to IWD: Ryan West, deputy director of Iowa Workforce Development, encouraged attendees to connect with him and the department in three ways: LinkedIn page, subscribing to IWD email updates for new program announcements and to view past and future information IWD mission: employable podcasts on Apple or Spotify to hear talks with executives from across the state. The agency has downloaded around 9,000 of its podcasts to date through the Apple and Spotify apps, West said.

here is a link to slides detailing the information provided during the roundtable.