Editor’s Note: Bradley Blankenship is an American journalist, political analyst and independent reporter based in Prague. The article reflects the views of the author and not necessarily those of CGTN.

A few weeks ago, US President Joe Biden assured world leaders at the United Nations General Assembly that his administration was not trying to start a new cold war and that his country was switching to “relentless diplomacy” instead. of a “relentless war”.

However, his administration’s actions at this point suggest otherwise – growing tensions in the Chinese region of Taiwan make the potential for a real hot war more likely, let alone a cold war.

It is extraordinarily irresponsible for the United States, but not that surprising. It is evident that the United States is so fundamentally degraded in its might relative to other rising powers that its underground capabilities – its ability to gather information and even its ability to accurately assess situations – has eroded.

While the US military has a huge budget – by far the largest in the world – that doesn’t automatically mean it’s the strongest in the world. Current and former officials are even starting to make it clear.

For example, US Secretary of the Navy Carlos Del Toro released the Biden administration’s first naval strategic directions in October, which publicly admitted that China is “a strategic competitor with naval capabilities that rival ours.”

In addition, Nicolas Chaillan, the first Pentagon software manager who has just resigned to protest against the slowness of technological innovation by the US military and because he couldn’t stand seeing China overtake the United States, said the United States has already lost its fight in the field of artificial intelligence with China. This obviously has strong implications for cybersecurity, intelligence, and a range of other areas.

“We have no chance of fighting China in 15 to 20 years. For now, it’s already done, it’s already over in my opinion,” said Chaillan, who will soon testify before Congress. about it, to the Financial Times. 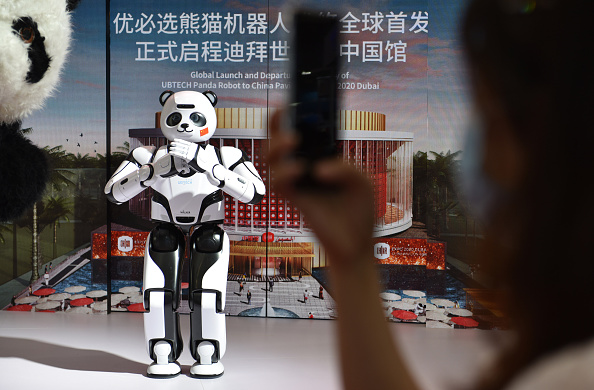 A panda robot named “Youyou” is unveiled at the 2021 World Robot Conference in Beijing, China on September 10, 2021. / Getty

A panda robot named “Youyou” is unveiled at the 2021 World Robot Conference in Beijing, China on September 10, 2021. / Getty

If it is true that the AI ​​”deal is done” and that China and the United States certainly have equal naval capabilities, what strategic sense is there in the Biden administration trying to spark tensions over Taiwan?

The Biden administration is clearly trying to consolidate support for separatist forces in Taiwan, and apparently some members of Congress want to expand the administration’s ability to defend against an “invasion” of the island.

However, for some politicians, this is not about Taiwan’s so-called independence or the lives of residents of Taiwan, but about trying to present China’s legal right to self-defense as an act of self-defense. aggression to isolate China from the world.

They perceive China’s defense as an act of hostility, but anyone who thinks it would in fact be the case in the administration is simply wrong.

It is true that the United States has soft power and cultural influence through its propaganda machines in the media. But China’s territorial integrity has continuously survived the onslaught of this American propaganda, and there’s no reason to think it would be any different this time around.

In fact, the propaganda efforts to undermine China’s territorial integrity have become so youthful and easily debunked that they have all but stopped trying to push them. The story of the genocide unfolding in China’s Xinjiang Uyghur Autonomous Region is one example.

Instead of clinging to this perverse ideology of American exceptionalism, the United States must find a way to face China’s existence on an equal footing. There is simply no other way for this situation to work.

Clearly this is the case since even non-military confrontation in areas like technology and commerce is already counterproductive and has no logical purpose. Washington is continually alone on these matters because of this.

Policymakers in Washington are simply out of touch with reality, stuck in the illusion of American exceptionalism as things at home – civil society, infrastructure, and the so-called American dream – crumble.

People all over the world will only be more suspicious of this terminal empire known as the United States of America, so an ultimate war with China would not make the world join in this illusion, this that would certainly not benefit Americans.