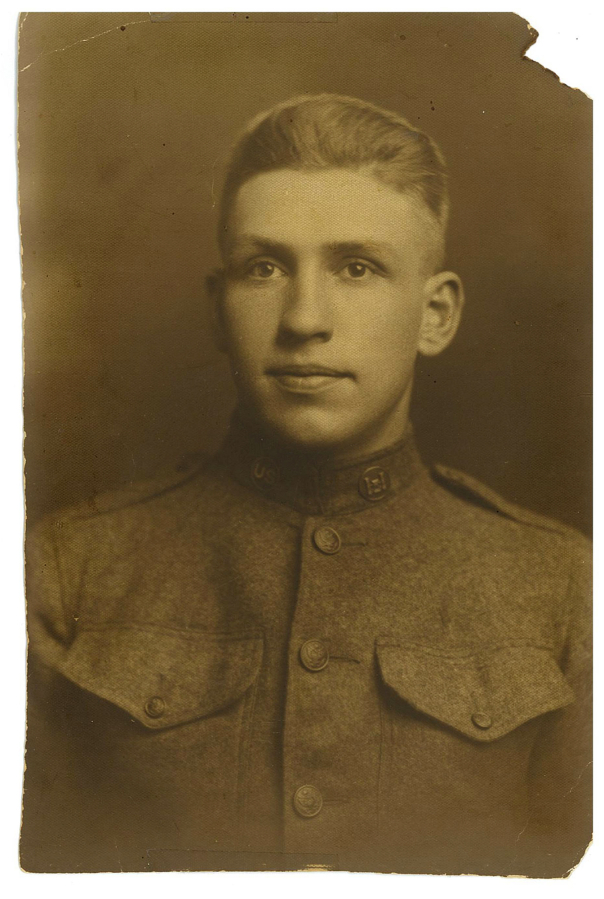 A day before Thanksgiving in 1917, Vancouver-born John Blaker put two onions away for a “square meal” that included corned beef and hash, he hoped.

Nothing was certain in France, where Blaker fought in the Great War. He leaned over a piece of paper and wrote a letter to his parents in Vancouver the day before Thanksgiving that year, recalling the trip.

Published in its entirety in The Columbian – with the exception of a few redacted words – the letter details Blaker’s trip to France on a ship.

“Some of the boys were really seasick,” the 23-year-old wrote, “because we had bad weather.

“The wind blew at 70 miles an hour for two days, so you can imagine how violent it was. I didn’t get sick, but really enjoyed the bad weather. The bowels are sure to rise when the masts of the boat almost touch the water as it turns over. One night the sailors left a hatch open and a big wave roared down the stairs to our dormitories. I was in the bottom bunk and was almost overwhelmed. The water was about four inches above my bed so you can bet your boots I was climbing around that time. It made it worse, we had no light. The lights were out and smoking was prohibited after sunset.

Blaker was one of 2 million Americans who arrived in France for the Great War, which had already consumed Europe for about three years. The first American troops had arrived about five months before Blaker’s letter, and they spread to the front lines to fight the German troops without much training or the best equipment, according to History.com.

“You don’t get real news about the war,” he wrote. “Don’t worry about the outcome. Believe me, the American and Canadian troops are “there”. Things look a lot brighter than a year or two ago. I wish I could go to the front and fight with our troops.

Blaker served with the Twentieth Engineers, the largest regiment in US Army history, with more than 8,200 officers and men. Their job as “Fighting Foresters” was to establish a logging network in Europe to provide troops with firewood, railroads, barracks, trench walls and more, according to the US Forestry Service. .

Before Blaker enlisted for the war, he was a “mill worker,” according to Katie Bush, a public historian at the Clark County Historical Museum. (His family owned a sawmill in the Proebstel area of ​​Clark County, and it is likely that Blaker worked there to learn skills that allowed him to be accepted into the Twentieth Engineers.)

In 1919 Blaker boarded a ship in Bordeaux and traveled to New York to return home to Vancouver.

He worked for the Clark County Sheriff’s Office and the Vancouver Police Department before becoming Chief in 1937.

The biggest event to occur during Blaker’s tenure – deserving of an Associated Press article that appeared in The New York Times – was an August 6, 1943 riot in downtown Vancouver that began with a brawl in a coffee shop.

“Police chief John Blaker accused the ‘thugs’ and ‘payroll drunks’ today of instigating a riot last night which police finally dispersed with tear gas,” said the next day’s article. “Three men were in the hospital and eight imprisoned.

“Chief Blaker said the alleged riot leader was in custody but no charges have been laid. Hundreds of people drinking in waterfront beer taverns where trouble started have piled up on the streets. They were joined by soldiers and civilians. A crowd of around 1,000 quickly gathered. The police were taunted and fighting broke out.

“Military police called to the scene returned all the soldiers to their barracks within an hour. City police, aided by auxiliary civilian defense police, deputy sheriffs, state patrol officers and firefighters who laid pipes as a threat, eventually dispersed the crowd.

“The protest erupted again later when about 600 people gathered outside the Vancouver Police Station. Vancouver Police called authorities near Kelso and Longview and demanded that State Guard units be mobilized. Mayor John Hogg called on the crowd from the steps of the police station to disperse. He was taunted and a stone crashed through the glass of the station door.

“The police then charged, firing tear gas canisters until the crowd dispersed. A tear gas shell hit Joe Walmer, an employee of an entertainment company, and he sustained a possible broken leg. Patroller Harold Edmonds suffered gas burns on one side. The soldier, who was the source of the trouble, was taken to Vancouver Barracks Hospital with skull injuries sustained when he was struck by Constable Pat Morrow.

The soldier, police said, fought with a civilian in a cafe in the early evening. He was thrown out, but later returned to attack the cafe “bouncer”. Mayor Hogg said today:

“I’m going to ask the governor to ensure that all beer taverns in Vancouver are closed the following evenings. “

Blaker retired in 1945 due to health problems and died in 1952. He was buried in the cemetery in Old Vancouver.