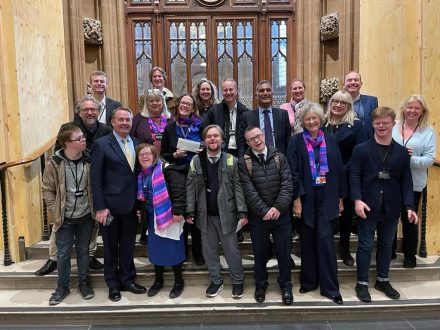 A new law to help nurses and other professionals in England better meet the needs of people with Down syndrome has been given the green light.

The Down Syndrome Bill has passed all parliamentary stages in both the Commons and Lords and is now ready to receive Royal Assent.

“We could not have dreamed that we would see history change”

The bill will require the Secretary of State to advise ‘competent authorities’ on ‘measures which it would be appropriate for them to take to meet the needs of people with Down syndrome’.

The authorities covered by the bill include those providing health, social care, education and housing services.

“The advice will also help people with Down syndrome and their families better understand what they can expect and what they are entitled to,” said the explanatory notes that accompany the bill.

The bill was introduced by Dr Liam Fox, Conservative MP for North Somerset, as a private member’s bill and received cross-party support.

The explanatory notes said people with Down syndrome faced “specific challenges”, and yet many struggled to access the support they needed.

A major driver of the bill was the fact that the life expectancy of people with Down syndrome has increased in recent years to 58, and many are now outliving their parents.

“As such, there is a need to approach community services to meet the long-term care needs of an aging population of people with Down syndrome,” the supporting documents said.

The government has pledged to appoint a head of integrated care commissions to oversee the implementation of the guidelines issued under the bill.

Dr Elizabeth Corcoran is one of the founding members of the National Down Syndrome Policy Group, which supported the creation of the bill.

A third of the group’s administrators are adults with Down syndrome.

The bill requires the secretary of state to consult with others when developing the guidelines, and Dr Corcoran said it would be crucial to hear the voices of nurses.

She said: “We will help open a consultation so that members of the community, including nursing and allied health professionals, respond to the consultation with their experience of the type of care and support people with Down syndrome. Down answered: what worked, what didn’t.

“And all of that will feed into the government guidelines that will accompany the bill.”

Explaining what it meant to her to see the Bill pass its final reading on Friday, Dr Corcoran said: ‘It was so moving, we couldn’t have dreamed we would see history change today.

“We know the real work is sort of going to start now, but it’s so exciting.

“There is so much evidence that people with Down syndrome need a tailored approach to education and healthcare, and to see that this is also recognized by the government [is] so encouraging.

A concern raised by some groups was why the bill focused only on Down syndrome and how the measures contained in the legislation could benefit other people with learning disabilities and genetic conditions.

The government has pledged to consider the ‘overlaps and links’ between Down syndrome and other conditions when consulting for guidance.

Helen Laverty, professional lead in learning disabilities and mental health nursing at the University of Nottingham, welcomed the bill and said it was important for nurses.

She said Nursing schedules“It is important that we see people with Down syndrome as full citizens, rather than a homogenous group of individuals whom we think we know how to take care of.

“It also gives us the opportunity to engage more effectively with this community and ensure that we are meeting the needs of people who have mild to moderate learning disabilities…but also people with profound disabilities, who also have Down syndrome.”

She said there was a clear appetite for such an approach for all learning disabilities.

Gillian Keegan, minister for care and mental health, praised those who had worked to push the bill forward.

“We will work closely with people with first-hand experience in developing guidance.”

It is expected that the necessary guidance for the law will be developed within one year of the law’s adoption.