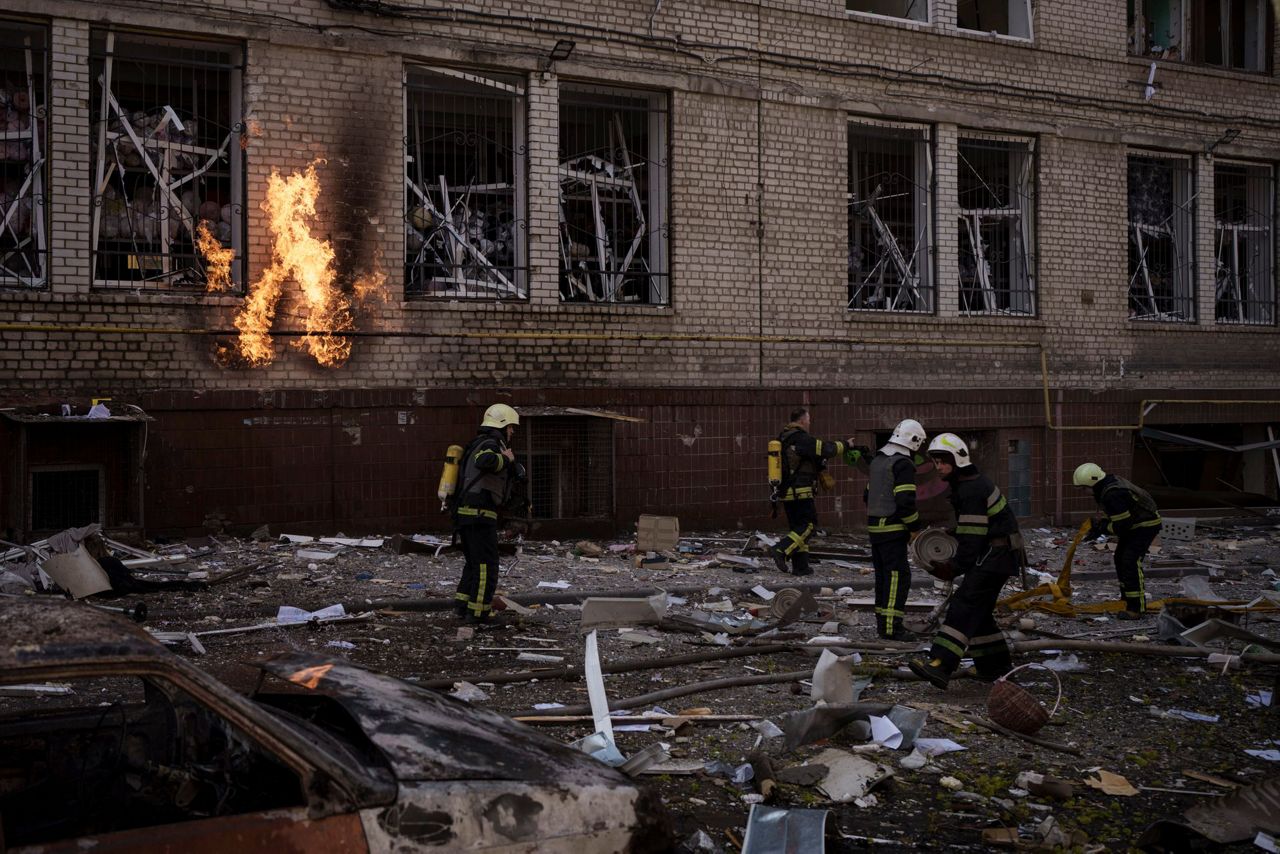 KYIV, Ukraine (AP) — Russian forces stepped up scattered attacks on kyiv, western Ukraine and beyond on Saturday, an explosive reminder to Ukrainians and their Western supporters that the whole country remains under threat. despite Moscow’s pivot to a new offensive in the east.

Stung by the loss of its flagship in the Black Sea and outraged by the alleged Ukrainian aggression on Russian territory, the Russian military command had warned of new missile strikes on the Ukrainian capital. Officials in Moscow said they were targeting military sites, a claim repeated – and refuted by witnesses – throughout the 52-day war.

The balance sheet is much deeper. Every day brings new discoveries of civilian casualties from an invasion that shattered European security. As Russia prepared for the planned offensive, a mother cried over the body of her 15-year-old son after rockets hit a residential area in Kharkiv, a city in northeastern Ukraine. A baby and at least eight other people died, officials said.

In the Kyiv region, authorities reported finding the bodies of more than 900 civilians, most of them shot, since the withdrawal of Russian troops two weeks ago. Smoke rose again from the capital on Saturday morning as Mayor Vitali Klitschko reported a strike that killed one person and injured several.

The mayor advised residents who had fled the city at the start of the war not to return.

“We do not rule out further strikes on the capital,” Klitschko said. “If you have the opportunity to stay a bit longer in the cities where it’s safer, do it.”

It was not immediately clear what was hit in the strike on Kyiv’s Darnytskyi district. The sprawling area on the southeastern outskirts of the capital contains a mix of Soviet-style apartment buildings, new shopping malls and big-box retail stores, industrial areas and rail yards.

Russian Defense Ministry spokesman Igor Konashenkov said an armored vehicle factory was targeted. He did not specify where the plant was, but there is one in the Darnytskyi district.

He said the plant was among several Ukrainian military sites hit by “high-precision air-launched long-range weapons”. As the United States and Europe send new weapons to Ukraine, the strategy could be aimed at hampering Ukrainian defenses ahead of what is expected to be a full-scale Russian assault in the east.

It is the second strike in the kyiv region since the Russian military pledged this week to step up missile strikes on the capital. Another hit a missile factory on Friday as residents went out for walks, foreign embassies planned to reopen and other tentative signs of the city’s pre-war life began to resurface after the failure Russian troops to capture kyiv and their withdrawal.

Kyiv was one of many targets on Saturday. The Ukrainian president’s office reported missile fire and shelling in the past 24 hours in eight regions of the country.

The governor of the Lviv region in western Ukraine – long considered a safe zone – reported airstrikes on the region by Russian Su-35 jets which took off from neighboring Belarus.

Apparently in preparation for its eastern assault, the Russian military has in recent days stepped up the bombardment of Kharkiv, Ukraine’s second-largest city. Friday’s attack killed civilians and injured more than 50 people, the Ukrainian president’s office reported.

On Saturday, an explosion believed to be caused by a missile sent rescuers rushing near an open-air market in Kharkiv, according to AP reporters at the scene. One person was killed and at least 18 people were injured, according to rescuers.

“All the windows, all the furniture, all destroyed. And the door too, ”said a stunned resident Valentina Ulianova.

In southeastern Ukraine, the southern port city of Mariupol is holding up, but the situation is critical, the Ukrainian president’s office said. Russian troops have maintained a blockade there since the first days of the invasion.

Russian Defense Ministry spokesman Igor Konashenkov said on Saturday that Ukrainian forces had been driven out of most of the city and remained only in the huge Azovstal steelworks.

Capturing Mariupol would allow Russian forces from the south, crossing the annexed Crimean Peninsula, to fully link up with troops in the Donbass region, the industrial heartland of eastern Ukraine.

The battle for control of Mariupol has cost the trapped and starving civilians dearly. Residents reported seeing Russian troops digging up bodies in residential yards and banning further burials. It wasn’t clear why.

“The occupiers believe that this will make it easier for them to control this territory. But they are very wrong. They are wrong,” Zelenskyy said Friday night in his nightly video address. “Russia’s problem is that it is not accepted – and will never be accepted – by all Ukrainian people. Russia has lost Ukraine forever.

He also warned in an interview with CNN that “every country in the world” should be prepared for the possibility that Russian President Vladimir Putin could use tactical nuclear weapons, an underlying fear since the invasion began on 24 february.

Zelenskyy estimated that 2,500–3,000 Ukrainian soldiers died during the war and about 10,000 were injured. Ukraine’s prosecutor general’s office said on Saturday that at least 200 children had been killed and more than 360 injured.

Russian forces have also captured some 700 Ukrainian soldiers and more than 1,000 civilians, Ukrainian Deputy Prime Minister Iryna Vereshchuk said on Saturday. Ukraine is holding roughly the same number of Russian soldiers as prisoners and intends to arrange an exchange but demands the release of the civilians “without any conditions”, Vereshchuk said.

Russia’s warning about escalating attacks on kyiv came after Russian authorities on Thursday accused Ukraine of injuring seven people and damaging around 100 residential buildings in airstrikes in Bryansk, a border region from Ukraine.

Ukrainian officials have not confirmed any striking targets in Russia. However, they claimed responsibility for destroying a key warship with missiles earlier this week.

The Moskva sank on Thursday after sustaining heavy damage. Russia did not acknowledge any attack, saying only that a fire had detonated ammunition on board.

The sinking reduced Russia’s firepower in the Black Sea and appeared to symbolize Moscow’s fortunes in an eight-week invasion widely seen as a historic mistake after Russia withdrew from the kyiv region and much of it. from northern Ukraine.

After the removal, the bodies were left on the streets of towns around Kyiv or given temporary burials. Andriy Nebytov, who heads the region’s police force, cited police data indicating that 95% died from gunshot wounds, saying they were “simply executed in the street”.

More and more bodies are being found every day under the rubble and in mass graves, he added, with the highest number being found in Bucha, more than 350.

The diplomatic chasm between Russia and the West widened further on Saturday, as Moscow banned British Prime Minister Boris Johnson and a dozen other senior British officials from entering the country in response to British sanctions.

Chernov reported from Kharkiv. Yesica Fisch in Kramatorsk, Ukraine, Robert Burns in Washington, and Associated Press reporters around the world contributed to this report.

Copyright 2022 The Associated Press. All rights reserved. This material may not be published, broadcast, rewritten or redistributed without permission.