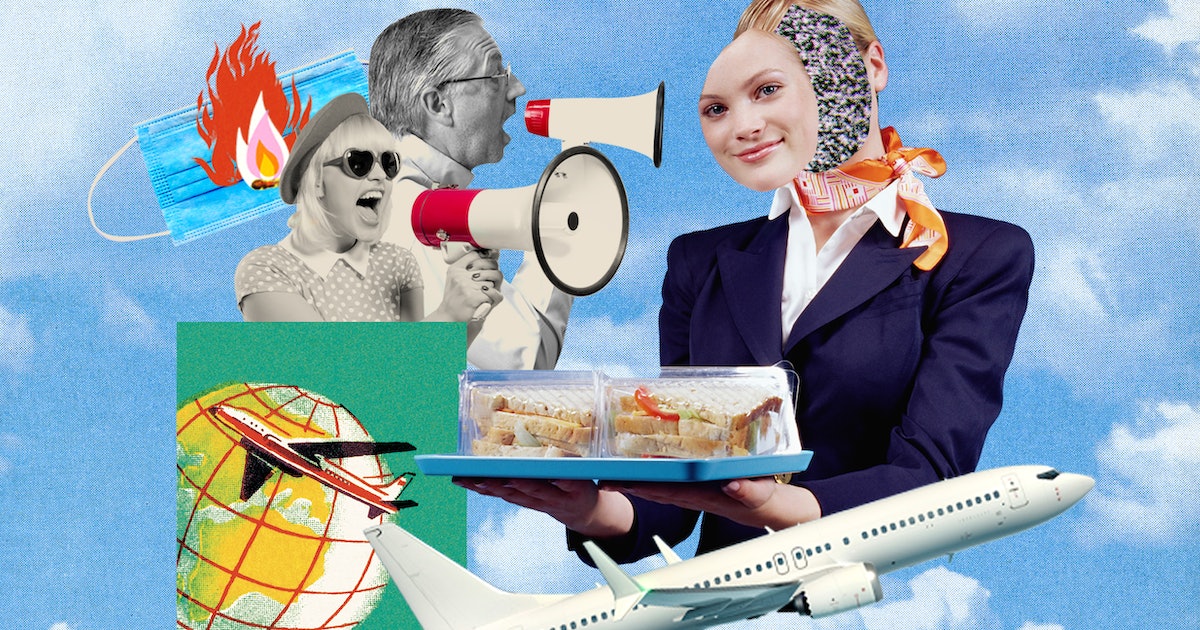 Throughout the pandemic, essential workers have borne the brunt of public frustration and fears about COVID. Flight attendants are rarely mentioned alongside restaurant workers or nurses and doctors, but they have endured some of the worst treatments, with 85% of airline staff claiming to be dealing with an unruly client in 2021, according to a July survey by the Association of Flight Attendants-CWA. These incidents, 17% of which have degenerated into physical confrontation, often affect women, who represent nearly three quarters of cabin crew. Bustle spoke to Kate *, 33, a west coast-based flight attendant, about some of her experiences during the pandemic.

When things stopped, I kept stealing because I didn’t want to be alone in my apartment. But we’ve had a mask compliance issue on more than half of the flights we’ve worked on throughout the pandemic. We kick someone off the plane at least once every three days. I firmly believe that you should wear a mask if you are traveling, especially before there is a vaccine, but I didn’t think I would have to control that. I never applied for this job. Best of times, they roll their eyes and cover their faces. The worst case is that they are completely rebellious and will not do it.

One customer was particularly ridiculous. This gentleman was not wearing a mask at all, and he didn’t even recognize or look at me when I approached him. He ate, and every time I asked him to put on his mask, he just put food in his mouth. Our policy is to only call someone back three times, but we’ve done it four times with this guy. Finally, I called someone to get him off the plane before taking off. His behavior has completely changed. He started to cry and scream and call me damn. This one came out because it showed how much energy some people put into not wearing a face covering and how manipulative they can be to avoid it.

“On the plane, I dissociate myself a bit.

During Labor Day weekend, which was very busy as it had been all summer, I was flying in and out of Florida. One guy kept falling asleep with his mask around his neck and his mouth wide open. We would ask him to put it on, and I wouldn’t even turn around half a second later and he would come back down. He said it didn’t suit him, so I would give him one issued by our airline. The next thing you know, there were holes dug! I’m like, what a clown! We threw him on the connecting flight, and he’s now banned from flying with our airline.

It’s scary because most of the time the offenders are bigger men and a lot of flight attendants are shorter women or men. Some types of men get mad on the plane and feel like they can bully you into getting what they want. People touch us more because of the masks – they don’t think I can hear them with them, so they hit me to get my attention, and that puts me on edge. I was even pushed yesterday by someone who wanted me to notice them. I’ve reached a point where I have a knot in my stomach every time I leave for the airport – I know it won’t be a good day. It’s rarely a good day anymore; it is generally fair or tiring and somewhat bad.

I don’t really have a way to deal with this. I would meditate and be wise myself, but now I think I’m going to have to take medicine. I also work more than usual which makes the problems worse. There isn’t much you can do. On the plane, I dissociate myself a little. At the start of my career, someone said to me, “When you’re in a difficult situation on the plane, pretend it’s happening to someone else. Sometimes it works.

As a flight attendant, our job is to make people happy. We are a social group of people who like to put others at ease. So the fact that the majority of our interactions at work are so hostile and angry affects you pretty quickly. When I fly with other airlines, I bring small individual bath salts and chocolates for their flight attendants. I feel so bad knowing what they are going through.

This interview has been edited and condensed for clarity.