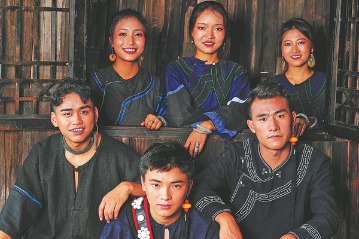 His trip to the remote mountainous region had nothing to do with rest or recreation.

With a specialization in work and social security under his belt, Liu had been involved in charitable work and researched rural development. In his second year at university, he attended a school in rural Anhui Province as a volunteer teacher, which inspired him to continue the role after graduation.

He had planned to teach at a school in Meigu County for two years, then return to academia to continue his education and earn a master’s degree or prepare for the civil servant exam and get a stable job.

However, Liu did not expect that 10 years later he would still teach in the county.

He also did not expect to discover the musical talent of his students, nor to found a group, called Shiguangzhe Jihua, made up of six high school students, three boys and three girls.

On November 25, during the New Year of the Yi ethnic group, celebrated from November 23 to 27, the group released an album, titled Shiguangde Shengyin, or The Sounds of Time. It includes four original songs written by the band members that express their thoughts and feelings about growing up, and two songs adapted from Yi folk songs, one of which is about a traditional wedding and the other about a ride on a shepherd.

Since July 2019, when Liu first shared their music on social media, the group has gained a large fan base. Their first video, in which Liu’s students sang Yi folk songs while playing guitar and hand drums, sitting by a campfire dressed in traditional clothing, won the group more than 10,000 fans in one day and has been viewed 250,000 times. To date, the group has performed over 100 Yi folk songs, sharing them online with their 180,000 subscribers.

In July, the group was crowned champion of the fifth season of the Chinese Yi Singing Competition, produced by Liangshan Yi Autonomous Prefecture TV Channel.