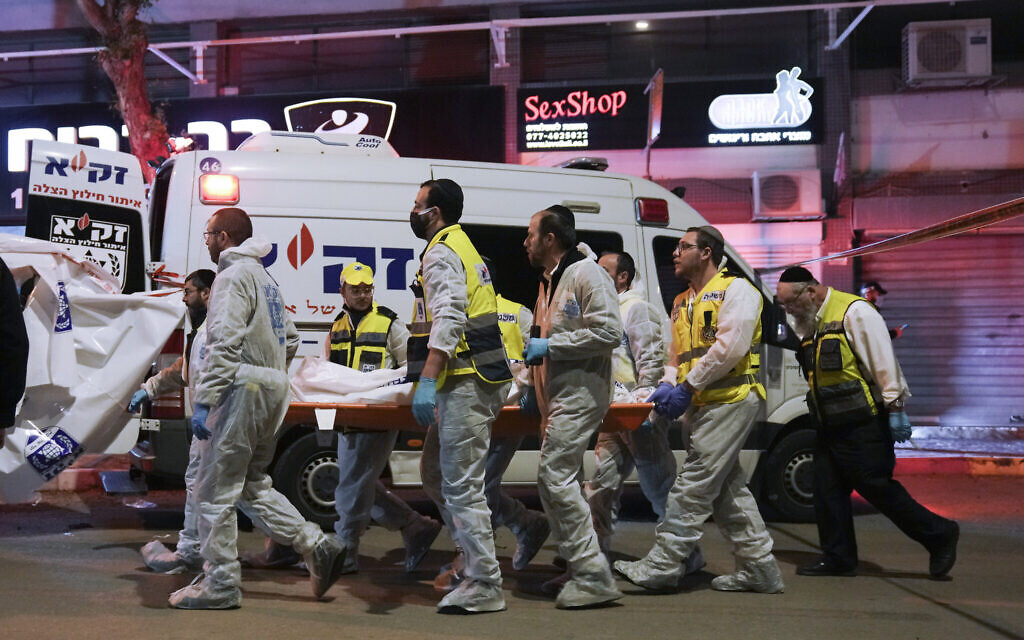 Israeli leaders vowed on Sunday to fight terrorism with “all their might” after two people were killed and several others injured in a shooting in the northern town of Hadera. The two terrorists, both Israeli Arabs from Umm al-Fahm, were shot dead.

Prime Minister Naftali Bennett visited Hadera police station after the deadly attack. He spoke with one of the undercover officers who killed the attackers, then held a briefing with security chiefs.

Foreign Minister Yair Lapid, who was hosting a diplomatic summit with the foreign ministers of the United Arab Emirates, Morocco, Egypt, Bahrain and the United States at Sde Boker in the Negev, briefed the dignitaries of the attack.

“All foreign ministers denounced the terrorist attack and asked to send their condolences to the families and their wishes for the recovery of the injured,” Lapid said in a statement.

“Tonight’s heinous terrorist attack is an attempt by violent extremists to terrorize and damage the fabric of life here. I extend my condolences to the families of the victims and my wishes for recovery to the injured.

Also at the top, US Secretary of State Antony Blinken condemned the attack and sent his condolences to the families of the victims.

We condemn today’s terrorist attack in Hadera, Israel. Such senseless acts of violence and murder have no place in society. We stand with our Israeli partners and send our condolences to the families of the victims.

“We will not tolerate terrorism in the State of Israel and we will fight it with all our might,” Finance Minister Avigdor Liberman said. “A difficult and painful evening. I express my deep sadness to the families of the victims and I extend my best wishes for a speedy recovery to those injured.

Defense Minister Benny Gantz said Israeli security forces were “dispersed and on high alert” across the country following the attack.

“The Israel Defense Forces and all other security forces are deployed and on alert with all the tools [needed] restore calm and ensure the security of the citizens of Israel everywhere and on all fronts. We will act aggressively against terrorism and terrorists, and we will advance the continued build-up of troops on the ground,” Gantz said.

The defense minister makes his remarks following a meeting with senior security officials, including the IDF chief of staff, military intelligence commander, head of the Shin Bet security service and the commissioner of the Israeli police.

Gantz praised the plainclothes Border Patrol officers who shot and killed the two terrorists responsible for the shooting attack and wished those injured a speedy recovery.

While the names of the suspected terrorists were widely published and remained readily available online, police later on Sunday obtained a general gag order from a court in Acre that barred the publication of “all details of the investigation and all the details that could identify the suspects”.

Police said the attackers arrived at the scene with 1,100 bullets, along with at least three handguns and six knives. A video circulating on social media reportedly shows the two terrorists hugging in front of an Islamic State flag before the attack. The identities of the people in the video could not be independently verified.

Security forces were examining whether the gunmen were somehow linked to the deadly terror attack that occurred in Beersheba last week. The terrorist in that attack, who killed four people before being shot, had served time for activities linked to the Islamic State. He was also an Israeli citizen.

Security officials examine a car believed to have been used by the two gunmen who carried out the Hadera terror attack, March 27, 2022 (Channel 12 screenshot)

Police entered the town of Umm al-Fahm shortly after the attack to search for suspects.

“The Municipality of Umm al-Fahm expresses deep shock, condemns this horrific act and condemns any act of violence. The municipality shares the pain of the families of those killed in Hadera and wishes a speedy recovery to the injured,” the municipality said in a statement.

“A very difficult evening. Sincere condolences to the families of the victims and best wishes for a speedy recovery to the injured,” Justice Minister Gideon Saar tweeted. “The abandonment of governance over the past decade, the proliferation of illegal weapons in the Arab sector and the avoidance of anti-social media incitement legislation comes at an unbearable price, as we have experienced this evening. We must change this reality.

Communications Minister Yoaz Handel said the attack, which occurred shortly before the start of the Muslim holy month of Ramadan, was the result of a “will to kill Jews – a will that existed in throughout history and never dies”.

“No settler violence and no other excuses, no infighting and no politics – the only reaction is an iron wall,” Handel said in an apparent jab at US Secretary of State Antony Blinken for comments. that he did earlier in the day.

“We have been through tough situations, we will exercise our price and win.”

The Islamist Ra’am party condemned the terrorist attack in Hadera, saying that “this is an ISIS-type heinous terror that does not reflect Arab society, whose members seek to live with dignity and according to Right wing state”.

Party leader Mansour Abbas said: “I call on all educational, political and religious leaders in Arab society to work together to determine practical measures to address this challenge of [these] criminals, who are wandering weeds in Arab society.

Merav Michaeli, leader of the Labor Party, said: “A terrible and difficult evening. Our most sincere condolences to the families of those murdered and our wishes of recovery to the injured. We will continue to fight terrorism relentlessly. The contrast between the appalling act in Hadera and the Negev summit reminds us again that peace and normality have enemies. We must not allow them to prevail.

Opposition leader Benjamin Netanyahu said only “a strong and aggressive hand” can restore security to the citizens of Israel.

Likud MK Yuli Edelstein called on the state to use “the full power of its security forces.”

Likud MK Nir Barkat called on the government to change its policy regarding the acquisition and use of firearms for self-defense.

“The government must allow retired fighters to immediately receive a firearms license, in order to neutralize a terrorist as quickly as possible,” he said.

“I call on everyone who has a gun license to kill the terrorists as soon as possible. The police alone cannot meet these challenges, so now citizens bear the burden.

The Joint List, a predominantly Arab opposition party, condemned the attack as “shocking” and “unwarranted”.

“The deadly attack in Hadera today is a shocking crime. There is and can be no justification for harming civilians. These acts have nothing to do with the political struggle that the Arab public is waging for his rights. This is not his way and neither will he be,” the party said in a statement.

“The Arab public is far from ISIS and its radical and dangerous doctrine and has condemned this doctrine for many years. Our way is a non-violent struggle, it was so and it will be so. In these difficult times, we call on the public, Arabs and Jews, to act responsibly. »

Many other right-wing opposition MPs criticized the government over the attack.

“Like in Oslo times [Accords]smiling photographs of out-of-touch politicians at summits, will the streets be filled with victims of ‘peace,’” MK Bezalel Smotrich, leader of the far-right Religious Zionism party, wrote on Twitter.

“We have said and warned that a government that depends on the Islamic movement will end up seriously undermining the security of the country and that is what is happening,” he said.

“The government is trampling on the safety of the residents of the state. Great Bennett State Management! Go away!”

“We salute the bravery and courage of the perpetrators of this heroic operation, which comes in retaliation for the blood of the martyrs, and in response to the aggression and terror of the occupation,” Hamas said in a statement.

“The heroic Hadera operation came in response to the height of humiliation and shame in the occupied Negev,” senior PIJ official Khalid al-Batsh said in an interview with Palestine Today.

Neither terrorist group has claimed the terrorists as members.