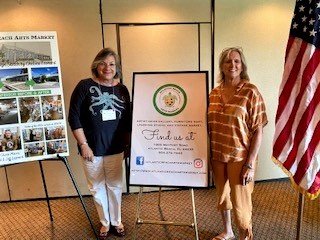 Moore is originally from Boston and moved to the Jacksonville area in 1984. After a career as a nurse midwife / practitioner, she retired with the opportunity to start her own pottery studio. She partnered with her daughter and son-in-law to open the Atlantic Beach Arts Market, a 5,000 square foot creative space and vintage market open seven days a week and located at 1805 Mayport Road. The market has over 90 local artists and vendors and a learning studio. It also sells art, jewelry, paintings, pottery, glass, fine art, and handmade gifts.

Moore’s assistant, Jeannie Gabrynowicz, is a longtime resident of Atlantic Beach, but has lived overseas several times during her husband’s naval career. While working in administration at the University of Jacksonville, she enjoyed taking many art classes as part of the benefits. His art concentrations are printmaking and painting. She shares a corner at the Market with her husband, who sells natural photographs of the surrounding area.

The guest speaker at the Newcomer Alumni Luncheon on October 6 will be Allison Misora, with a guest from K9s for Warriors. K9s for Warriors is the nation’s largest supplier of trained service dogs to military veterans suffering from PTSD, head trauma or military sexual trauma.

The cost of this lunch event is $ 23. Reservations for lunch should be made by contacting [email protected] as soon as possible in order to reserve a seat.

Newcomers Alumnae is a social group made up of women who live in Ponte Vedra Beach, Nocatee, Jacksonville Beach, Atlantic Beach, Neptune Beach, Jacksonville and St. Augustine. Contact [email protected] for more information about this club.