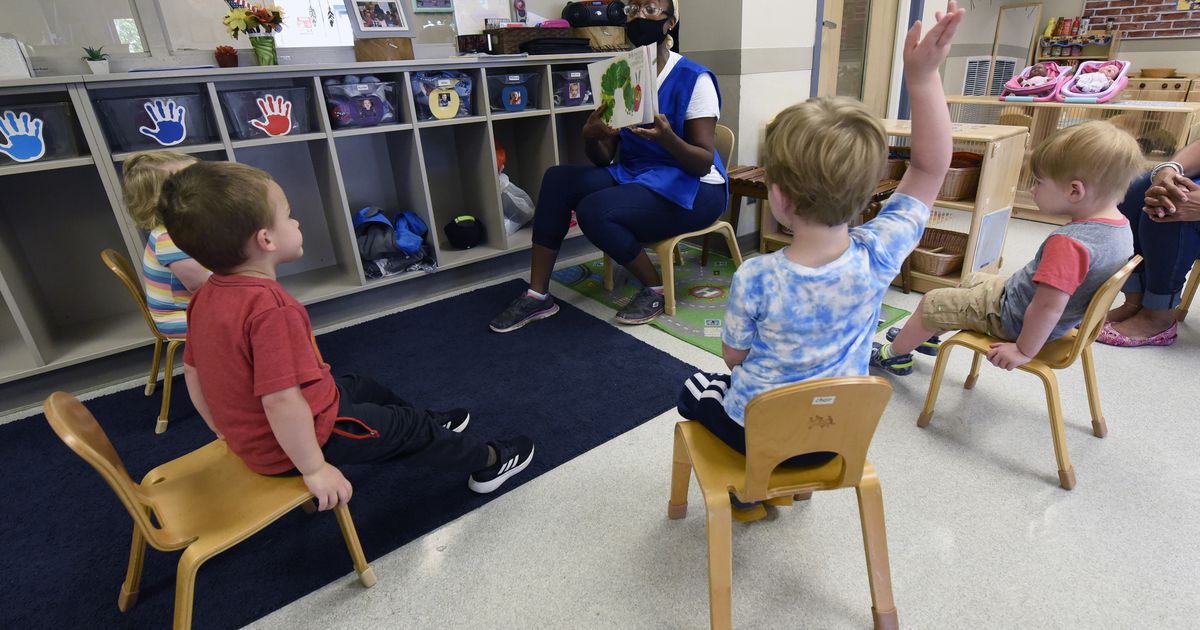 “What this means is that the Air Force has officially told Congress that this is a project it wants, and if it had the money, this is what it would build. “Gessel said in an interview. “But there was not enough money allocated through the Air Force budget process.”

Documents obtained by the Dayton Daily News indicate that current Wright-Patterson daycares “cannot accommodate the total waiting list, which ranges from 200 to 415 children.”

“Parents must wait more than 90 days to place their children in daycare”, indicates a document entitled “DATA OF THE MILITARY CONSTRUCTION PROJECT FOR FISCAL YEAR 2022”.

The child development center in the old school building is “in poor condition and has an impact on the provision of child care,” says one of the federal documents.

The document points to problems in the facility, including “problems with deteriorating structural systems, failure of utilities, and infestation of insects and vermin (which) hamper the ability to provide quality care and result in excessive service calls and shutting down childcare activities. in some cases.”

To exploreOwner of two Dayton-area malls files for bankruptcy

The document also identifies “failures of the facilities (including) a failing pump resulting in burnt and smoking rubber seals, resulting in a 30-minute evacuation of the daycare. A gas leak resulted in a four-hour evacuation. Defective components in the fire protection system resulted in a 24-hour fire watch so that hard-to-obtain spare parts could be obtained and repairs made.

A recent inspection identified the daycare as one of the top two concerns in Wright-Patterson, due to its location outside the secure perimeter and along a main thoroughfare, the document said.

“Failure to replace the Child Development Center and provide additional child care spaces will leave dependent children in inadequate and undersized facilities and have a negative impact on staff morale,” adds the document.

“Children are not in danger”

Child care in Wright-Patterson is offered at four child development centers housed in three facilities, the document said. This includes a building at 156 Spinning Road in the Prairie subdivision, a Riverside housing area for base staff near Airway Road. The other two facilities are in Zone A and Zone B on the base, according to a base’s website.

Basic Child Development Centers are accredited by the National Association for the Education of Young Children and certified by the United States Department of Defense (DoD) and the Air Force. Children of active-duty military personnel and Defense Department civilians are eligible for care at the centers, according to a Wright-Patterson Support Squadron website. They are not regulated by the Ohio Department of Job and Family Services, but by the DoD.

According to online information from the center at 156 Spinning Road, the centre’s DoD certification expires in February 2022. Its most recent inspection of the “top seat” was on August 13, 2020. Its national accreditation expires on November 1.

Details of the inspection were not disclosed, but according to www.militarychildcare.com, the site meets DoD standards for personnel management, background checks, surveillance and inspections, fire and safety, health and sanitation, and other areas.

The other three base centers housed in two other buildings on the base have similar accreditation language on the website.

A statement from the 88th Air Base Wing, the unit that acts as the owner of the sprawling Air Force base, said the children were not at risk in any of the day care centers on the base. The base also said the new day care center, currently under design, would be built on the base, moving children from a “deteriorated facility over 60 years old.”

“We are committed to providing our families with safe, healthy and high quality child care services,” the air base wing said in a statement in response to questions from the Dayton Daily News. “Children are not at risk to health or safety at any of our four Child Development Centers (CDCs) on the facility.”

Each year, in accordance with Air Force regulations, each base center undergoes four comprehensive inspections of the local headquarters and a higher headquarters with an “emphasis on health and safety to ensure the well-being of children.” and staff, ”said the base.

“We pride ourselves on providing a safe and healthy environment for children and staff. If a situation threatened the safety of our children, the facility would be evacuated, ”the base also said. “In addition, we perform daily, weekly and monthly health and safety inspections of facilities and playgrounds. “

“Not only will the new CDC require less routine maintenance, it will be larger, accommodating more than 300 children, allowing us to provide child care to more families and reduce our waiting list for care.” , said the base.

“Childcare is a priority”

The prospects for making the new daycare a reality are strong in Gessel’s eyes.

“They will need a push from the House and the Senate,” he said. “But because the Air Force has officially declared this to be a priority, then with a push from Congress, it can be funded. But it is not automatic.

In an interview, Turner, R-Dayton, said he asked his colleagues on the House Armed Services Committee, as well as House owners, to have money taken in the new budget year. for daycare.

“There are a lot of priorities and demands this year, especially due to COVID, and the increased needs of military employees,” Turner said. “So we’ll have to see how these priorities evolve.

For many of these projects, federal officials are paying attention to the ranking of local needs and priorities of the Dayton Development Coalition, the congressman also said. “Our office is monitoring unfunded priority applications that affect Wright-Patterson Air Force Base,” he said.

Turner said he was also aware of the need for a new Army and National Guard reserve center at the base.

When Congress adds projects, they can be pulled from an unfunded priority list for services, Gessel said. Lawyers hope that will happen in this case.

Wright-Patterson, Ohio’s largest concentration of employees at one site, is home to a growing number of workers with children. Base spokespersons typically put that number of employees at around 30,000, but Gessel said the number is actually north of that.

“The official number is actually higher, at least from (fiscal year) 2019,” he said.

With more uniformed personnel assigned to Wright-Patterson or civilian employees being offered jobs there, child care is an increasingly important issue.

“Employees are essential to the Air Force’s mission,” Gessel said. “Child care is a priority for parents who work at the grassroots.